Mira Sommer (HZ): At first - i love the booklet of your Album "Wolf love". Very beautiful pictures and costumes? Are your tattoos real or is it bodypainting?
Steve: All Jenny and my tattoos are real, (we've stopped using bodypaint)
HZ: What is the Title "Wolf Love" referring to?
Steve: If you can learn to unconditionally love the wild wolf then you can begin to really understand nature... 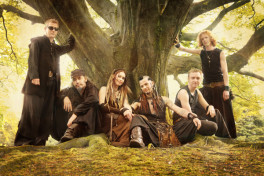 HZ: Where did you get your instruments from? And your inspiration for tunes and textes?
Steve:All our instruments are built by either ourselves or by traditional master craftsmen who fashion these hand-made custom beauties for us. (most come from germany , austria, sweden and u.s.a)
Our inspirations comes from life itself and the miracle which is this planet.
HZ: What is the main motif/Leitmotiv of your new Album?
Steve: In the words of the late great Aleister Crowley : ‘do what you wil...’ (there are no rules, you are free to make up your own life in whichever way you like it, because we are born natural and free).
HZ: And what is the benefit of using shakespearean language for songtexts?
Steve: None whatsoever, I just studied a lot of literature and hence one finds oneself locked within recitations of  excruciatingly long and hazardous sentences which evolve and extrapolate into veritable pits of prozaïc ibberish...I guess I just love words...”
HZ: Can you describe the term: "neoceltic pagan folk"? Steve: That's what we used to call the music that Omnia made.
neoceltic = "new-Celtic" because as a Cornishman I am a Celt, but then in a modern sense
pagan = "nature religious" because we believe all of nature to be alive and thinking
folk = "acoustic music made on traditional instruments by common people"
because ..that's what we are and what we do.
HZ: Especially "Pagan" - what is  it?
Steve: In short: Paganism is a large (and varied) group of religions which believe that the earth is a living entity , and that animals and plants have souls. Although there are many of these "churches" that have fixed dogmas such as Wicca and Asatru, we have our own form of free-paganism which has no stupid fixed rules (unless you make them up yourself) It just has some guidelines...
HZ: You combined rap with medieval sounds. What do you think about mainstream music?
Steve: Commercial music to my mind is purely a product to make money for bis assed producers and labels, It is easy to understand for people with no brain and no soul. 95% of all bands are just commercial projects with fake stories, fake messages, fake stage-looks and quite often fake (mostly playback) music on stage.

HZ: How is it possible to survive as an individual and very special band in music business?
Steve: It's very very fucking hard indeed, we survive through a lot of hard work and a lot of positive thinking even when the going gets rough...which is primarily done by my wife Jenny and myself plus a few trusted people  who help us because they are friends and those who we pay to assist us or both.
But mostly Omnia survives because Jenny and me have no choice BUT to make music (we would go mad if we couldn't write and perform) plus our fans believe in us and support us by buying our CD's and going to our concerts year after year, thus making sure that we can pay the rent and eat...
(we are not rich, but we are still FREE)
HZ: What do you think about music industry nowadays in general?
Steve: I think the whole bloody circus of music corporation executives should be lined up and shot for being responsible for the death of living music and art... The only usefull thing that most of these monkeys could be used for is compost.
HZ: Working with ancient or medieval material - is it a kind of escapism or just celebration of beauty and myths?
Steve: To my mind it is modern society which is a form of escapism from real life.
We work with any material which interests us, it's simply that the "old stuff" is much purer and more interesting than most of the "modern stuff" which has been produced in the last 3 decades.”
HZ: Is the revival of the celtic culture/religion just art or something for stage and live performances or do you live this "religion"?
Steve: Nothing about the philosophy or the spiritual part of Jenny and me or OMNIA is fake or "just for stage". This is our life put into music and poetry, nothing more , nothing less...
HZ: Is there a lack of spiritual thinking in Europe? Do we need Religion? Are there any qualities left?
Steve: Yes there's a lack of spiritual thinking worldwide...
Yes monkeys need religion (everyone believes in something even if it's only money...which is also a made up metaphysical thing)
There are some qualities left , but far too few, it would be nice to see some more cool people doing more with there sense of the spiritual. It will never change the world though because for every cool intelligent freethinking soul in the world you get at least 1000 dickheads who don't give a fuck about the world and are only interested in their car, getting laid and proving to their beerdrinking buddies that they are not gay....”
HZ: When is your next concert in germany? And Thank you for this very interesting but far to short Interview” (To the reader: Hope more to follow).
Steve: In a couple of days, friday 10 september in Selb at the "Festival mediaval"
Your welcome Mira, thankyou for the interesting questions, I hope the answers are usefull to you and your readers...